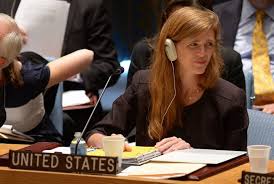 Part I
Ch 1- 6
Pretty basic childhood memories
SP (9 yr) was taken by her mother to America
after the breakdown of a marriage.

Ch 7- 12
I’m beginning to feel more engaged with the book than was initially the case. SP has digested the horrors of the Balkan conflict (war correspondent). She decided to enter law school to prepare her for a career in which she could influence the policymakers who might look away again from the atrocities of genocide.

Ch 13 – 18
SP does feel a profound disconnect between her personal good fortune and the rest of the world. She threads elements of her family story throughout the book.

Part 2:
Ch 19-40
The memoir finally begins to move ahead in a faster and more effective way.
I am very interested learning more about the insider’s account of foreign-policy-making.

Who is Samantha Power?
She is an Irish-American scholar  who won a  Pulitzer Prize for her book A Problem From HelI.
Ms Power has devoted much of her career to promoting the use of American power (Obama administration) to halt mass atrocities.
She served as United States Ambassador to the United Nations 2013-2017.

Ms Power was witness to genocide during the Balkan Crisis.
She a war correspondent for Foreign Policy magazine. When she enrolled at Harvard Law School she took courses about Holocaust related subjects. SP wanted to learn when was military force justified? Note: I’m reading this book as Trump decides ‘to take out” General Soleimani of Iran! Justified?